Ultratest is the culmination of a multi-year project in testosterone enhancement. It utilizes exceptionally novel and potent ingredients in a carefully-developed combination that is greater than the sum of its parts. The core ingredient is Geranylgeraniol. This is a terpene which is ubiquitous in nature and vital to animal life, but it is everywhere in trace amounts, so it was extremely difficult to isolate and extract.

Geranylgeraniol has been shown, in several recent papers out of Japan, to increase testosterone levels in animals to a truly remarkable extent — in fact, to such an extent that animals receiving geranylgeraniol saw their testosterone levels double. This can be attributed to the following mechanism of action: Geranylgeraniol potently increases cyclic AMP (cAMP) levels, which then activate the cAMP-dependent protein kinase (PKA), which then boosts mRNA and protein levels of steroidogenic acute regulatory protein (StAR)… and StAR is the rate-limiting gatekeeper of steroid biosynthesis in Leydig cells.

It’s worth mentioning that boosting cAMP/PKA can also induce a wide variety of other effects which have, in themselves, little to do with enhanced testosterone biosynthesis — and that all of these additional effects are positive. They include enhanced fatty acid oxidation, enhanced muscle glycogen synthesis, and vasodilation. It may be tempting to compare geranylgeraniol to forskolin — another known PKA-boosting substance — but forskolin has essentially zero oral bioavailability, and its use is primarily associated with GI distress, whereas geranylgeraniol is very well absorbed, has good oral bioavailability, and won’t induce uncomfortable side effects at any dose.

What ingredients are in Ultratest?

Geranylgeraniol is, for good reason, the core ingredient in Ultratest.

A high-potency aqueous extract of Tongkat Ali (eurycoma longfolia) is right alongside it. The aqueous extract of this plant has been shown, in numerous human studies, to enhance testosterone levels in active male subjects. It is well studied not only as a testosterone booster, but also as an ergogenic aid which can enhance athletic performance and reduce cortisol levels.

Phytol is the last key ingredient. Like geranylgeraniol, it’s a diterpene alcohol. And, again like geranylgeraniol, it’s ubiquitous in nature. In fact, phytol is a constituent of chlorophyll, so it could hardly be more ubiquitous. Yet, with that said, humans don’t have the ability to separate phytol from the chlorophyll molecules it is bound to, and, for this reason, human dietary consumption of unbound and bioavailable phytol is generally much less than 1mg/day.

Aromatase is the enzyme that converts testosterone to estrogen, and recent data indicates that phytol is the most potent natural aromatase inhibitor in existence. By blocking the peripheral conversion of testosterone to estradiol, phytol serves two vital roles: First, it inhibits the negative feedback mechanism of the HPG axis, thus promoting further downstream endogenous testosterone production. Second, it reduces blood estradiol levels, and keeps them low, which is associated with a number of obviously beneficial physical and mental effects.

We have every confidence that Ultratest will be of great use for improved libido and recovery, for anti-aging purposes, for assistance with recovery from the use of agents which would lower endogenous testosterone levels, or to kick-start a hard training program. It just doesn’t get any better than that.

How old do I have to be to use Ultratest?

The product is intended for men over 30 years of age, and for younger men who have reached full maturity and nevertheless have low testosterone levels. We’d prefer Ultratest not be used by anyone under 18.

Is there any way Ultratest could cause gyno?

No. Estrogen levels will drop with use, and there’s little progesteronic effect.

Should I stack Ultratest with anything?

If your goal is to gain muscle, TITAN works very well alongside Ultratest, and the Shilajit in TITAN may even augment Ultratest’s effects.

If you’re looking to lose fat, or just want more energy, chase your dose of Ultratest with a preworkout drink before heading to the gym.

One note with respect to diet: You may want to increase your cholesterol consumption to kick-start the process of testosterone biosynthesis.

Will Ultratest cause me to fail a drug test?

At present, as of September 2018, there are no substances in Ultratest which are banned by WADA or USADA. As phytol and geranylgeraniol are ubiquitous natural substances, it’s exceedingly unlikely that they’ll ever be banned. With that said, it is nevertheless recommended that you consult with your athletic organization before use.

How long will one bottle last? What are the serving sizes?

At the recommended dosing — 1ml once a day — one bottle lasts one month. Each 1ml serving contains nearly 100mg of geranylgeraniol, over 50mg phytol, and over 200mg of an ultra-high-potency liquid Tongkat Ali extract.

Is this a pill, a spray, or a liquid? If the latter, what does it taste like?

Ultratest is a liquid that’s to be taken orally. As far as the flavor goes, it’s essentially tasteless and can be mixed with ease into milk-based beverages without spoiling their flavor — in fact, we even find that it can make them taste better!

What results can I expect to see I’m eating right and training hard?

Most can expect increased energy at the gym and in daily life. Users who had previously suffered from low testosterone can also expect to notice a body-recompositioning effect.

How will Ultratest affect my libido?

Most users will notice an increase in libido.

How many times a day do I take it?

Once per day, though some users may prefer to take two doses per day.

Is there a certain time of day I should take Ultratest?

We believe that there are two logical times to take the product:

1. About forty minutes pre-workout, with use at roughly the same time of day on non-workout days.

2. Before bed, as testosterone is secreted during sleep.

In any case, if twice-a-day dosing is used, then the times should be about 12 hours apart, give or take a few hours. 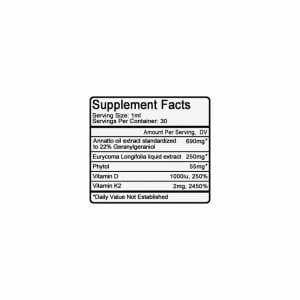 As with any dietary supplement, we recommend that you consult a physician before use. Check the product label for further warnings and cautions.

“These statements have not been evaluated by the Food & Drug Administration (FDA). This product is not intended to diagnose, treat, cure, or prevent any disease. ALWAYS consult your physician before taking supplements.”

Be the first to review “Ultratest” Cancel reply