Studies looking into the screening of ProLensis™ reveal the presence of saponins, tannins, alkaloids and anthraquinones. These phytochemicals are ultimately responsible for the effects of ProLensis™. It has long been known that saponins enhance androgen (such as testosterone) production, and that alkaloids increase the dilation of blood vessels in the sexual organs. 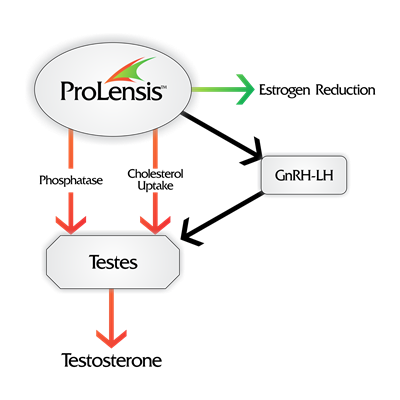 ProLensis™ is a multi-faceted compound in all of the ways it exerts its positive effects on the hormonal balance of the body. In regards to testosterone, ProLensis™ increases GnRH-LH signalling, and also increases cholesterol in the testes. These distinct processes are important for testosterone synthesis. GnRH, or Gonadotropin-Releasing Hormone, is released from the hypothalamus in the brain. In turn, this stimulates the release of LH, or Luteinizing Hormone, from the pituitary. LH is the hormone that directly stimulates cells (called Leydig Cells) in the testes to release testosterone. Evidence shows that ProLensis™ can stimulate LH 169% compared to study controls.

By enhancing GnRH-LH signalling, ProLensis™ amplifies the process by which testosterone is stimulated, akin to turning up the volume on a stereo. In cooperation with this, ProLensis™ also elevates levels of testicular cholesterol. Cholesterol is the equivalent of raw material in the testes job of creating testosterone. The cholesterol is taken up into the mitochondria of the testes where it is processed into pregnenolone. From this stage it is converted into sex steroids and glucocorticoids. Due to cholesterol’s status as a raw material, it’s uptake into the testes is the rate-limiting step in sex steroid synthesis. 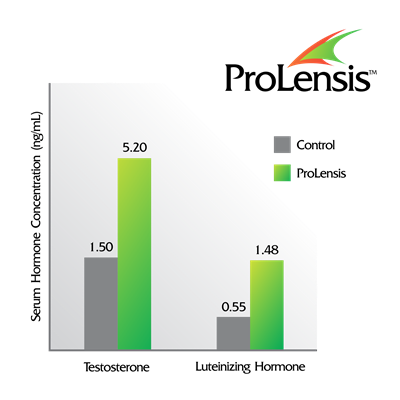 This manifests into a marked increase in testosterone of 347%, as shown in research. In other words, testosterone creation can only be enhanced if testicular cholesterol levels are elevated. In doing this, ProLensis™ increases testosterone output.

ProLensis™ has also been shown to act as an aphrodisiac. Studies involving mammals given ProLensis™ show a significant increase in frequencies of mount, intromission, ejaculation and ejaculatory latency. This effect is believed to be due to the increase in acid phosphatase (ACPT) in the testes. ACPT is widely distributed in the testes and plays an important role in the physiology of sperm. Increased levels of this enzyme are associated with higher testes output. Researchers believe this effect suggests an enhanced mobilization of carbohydrate and lipid metabolites which are used by the accessory sex structure and/or spermatozoa in the seminal fluid. 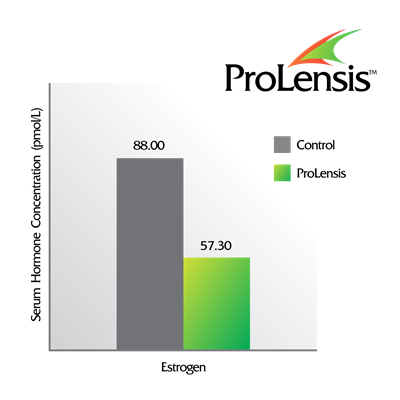 ProLensis™ contains phytochemicals that drive the machinery involved in sperm production and sex drive. In addition to the effects on blood flow to sexual organs that the alkaloid phytochemicals exert, researchers have hypothesized that other constituents of ProLensis™ may act directly on the central nervous system, modulating the action of neurotransmitters. Unbeknown to some, neurotransmitters such as serotonin play a very large role in the complicated science of sex drive.

By influencing neurotransmitters, the bioactive agents present in ProLensis™ further augment the aphrodisiac effect of the extract. Investigation into ProLensis™ has also demonstrated a marked decrease in estrogen levels in mammalian research models. This decrease is as much as 35% in comparison to study controls. While the researchers do not speculate why this may be the case, they do speculate that this reduction in estrogen may be partly responsible for the increased testosterone.

FENUSOL® is the saponin rich fraction obtained from Fenugreek seeds. Saponins are complex glycosidic compounds present in a diverse array of edible and inedible plants1. Each saponin consists of a sapogenin which constitutes the aglycon moiety of the molecule, and a sugar. The sapogenin may be a steroid or a triterpene and the sugar moiety may be glucose, galactose, pentose or a methylpentose. Fenugreek seeds are a rich source of saponins (5-6%).

Fenugreek (Trigonella foenum-graecum, Family: Leguminosae) is an annual herbaceous plant, 30 to 60 cm in height. The herb is native to North Africa, as well as the countries bordering the eastern Mediterranean, and is widely cultivated in India. Traditionally, the seeds of Fenugreek have been used as a condiment in Indian homes. Fenugreek is an important cash crop in various parts of the world, with the herb being used as food, spice and medicine.

The presence of special steroidal substances in Fenugreek seeds was first reported in 1919 by Wunschendorff, a French research scientist working in Algeria. This discovery was confirmed in various follow-up studies notably by Marker et a, who detected the presence of diosgenin, gitogenin and traces of tigogenin after hydrolysis of the plant material.

BIOLOGICAL EFFECTS OF THE FUROSTANOL SAPONINS

In sports nutrition, the anabolic effects of the furostanol saponins could be potentially used to induce increase muscle mass and strength, with the consequent improvement in athletic performance. In a clinical study, a preparation rich in furostanol saponins was shown to possess immunostimulating and leutinizing hormone releasing properties. The furostanols preparation also increased testosterone levels and spermatogenesis. Testosterone is known to play a key role in sperm cell production and immune functions and is often used to increase fertility and recovery. From a sports nutrition point of view, furostanol saponins are particularly promising since increased testosterone levels increase the deposition of protein in the muscles, leading to increased muscle mass and strength.

Urtica Dioica inhibits the binding of Testosterone to Sex Hormone Binding Globulin (SHBG), resulting in lower levels of “bound” Testosterone and higher levels of “free” Testosterone (this effect occurs as a result of Urtica Dioica binding to SHBG in place of Testosterone). Sex Hormone Binding Globulin (SHBG) production increases in tanderm with the Aging Process – SHBG binds to Testosterone, inhibiting Testosterone’s normal biological functions, resulting in the reduced Sexual Desire associated with the Male Menopause: Testosterone binds more strongly to SHBG with the progression of the Aging Process. Assists with Enlarged Prostrate and helps to prevent Prostrate Cancer and is an effective treatment for existing Prostrate Cancer. Useful for Osteoarthritis and Rheumatoid Arthritis.

Urtica Dioica (root) is an effective adjunct to Saw Palmetto for the treatment of Enlarged Prostate:

– Urtica Dioica inhibits the Aromatase and 5-Alpha Reductase enzymes that have been implicated in the development of Enlarged Prostate.

– The Urtica dioica Agglutinin content of Urtica Dioica inhibits the ability of Epidermal Growth Factor (EGF) to bind to its Receptors in the Prostate and to subsequently stimulate the growth of Prostate tissue (a key underlying factor in the progression of Enlarged Prostate).

– A constituent of Urtica Dioica ((10-E, 12-Z)-9-hydroxy-10, 12-octadecadienic acid) inhibits the Aromatase Enzyme that catalyzes the conversion of Testosterone to Estradiol (a key underlying factor in the progression of Enlarged Prostate).

Urtica Dioica Enhances the Function of these Substances

The Urtica dioica Agglutinin content of Urtica Dioica inhibits the ability of Epidermal Growth Factor (EGF) to bind to its Receptors in the Prostate and to subsequently stimulate the growth of Prostate tissue (a key underlying factor in the progression of Enlarged Prostate).

Benefits include increased fertility in both men and women, hormone balance, booster for the immune system, and increased energy, stamina, improved sexual function, memory, and focus. Maca Root has its own benefits for male hormonal health. It has been shown to reduce prostate size in studies done on male rats. This points to the conclusion that it may also help improve human prostate health as well. In other studies, maca has also been shown to improve sperm production, mobility, and volume, all important factors of increasing fertility.

Helps promote balance: Maca works by releasing chemicals and nutrients that sends message to the pituitary gland, which tells the body how much of each hormone to produce, whether it is producing enough, too much or just the right. So if things are out of whack, think of maca is like the good friend who tells the body what its doing wrong and how to correct the problems.

As a dietary supplement, take one (1) or two (2) capsules daily with food. Do not exceed two (2) capsules in any 24 hour time period. Do not use this product in cycles longer for more than 8 weeks. It’s not advised to take more than one (1) capsule daily unless you weigh over 225lbs. 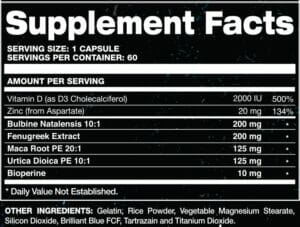 Do not exceed the recommended dose. This product should not be used by anyone under the age of 21. Do no use if pregnant or nursing, or if you are at risk of, or being treated for diabetes or high blood pressure. Consult your health care professional before using any dietary supplements.

Be the first to review “Ultra Male” Cancel reply