PSyche uses the most synergistic blend of proven performance boosters that are sure to help you achieve and exceed your goals.

Antaeus Labs PSyche is a mood and energy-enhancement supplement; a stimulant supplement that defies categorization. Part ergogen, part nootropic, it’s a caffeine-based pick-me-up that will enhance your work day and/or your workout sessions. PSyche contains only efficacious doses of the following naturally-occurring ingredients: Phosphatidylserine, Ornithine, and Caffeine.

For years mankind has dreamed of clean energy, and now that dream has been realized – no, not the as-yet-unfulfilled promise of renewables like wind and wave power, but a clean-feeling boost to productivity and work capacity. And now it’s here: PSyche supplement by Antaeus Labs.

It’s finally time to say goodbye to jittery, cracked out feelings of anxiety and tension caused by pre-workout products often laced with quasi-legal stimulants, and say hello to a pick-me-up that will reinvigorate your energy levels and mood to help you achieve peak physical and mental performance. Antaeus Labs PSyche uses the most synergistic blend of proven performance boosters that are sure to help you achieve and exceed your goals, whether they’re in the gym, on the pitch, at college or at work. Get a mental and physical edge with Antaeus Labs PSyche.

What benefits can I expect from PSyche?

Caffeine is probably the most studied ergogenic aid of all time, and is a staple in the lives of most people, whether used as part of a pre-workout powder, energy drinks, tablets, or your morning coffee. Caffeine is a powerful stimulant and vasoconstrictor shown to increase endurance in both aerobic and anaerobic exercise, improve power output and training volume while reducing fatigue and perceived exertion. One study demonstrated that caffeine used before a workout can cause a greater increase in testosterone than exercise alone. [1]

L-Ornithine is an amino acid produced from arginine that facilitates the urea cycle and promotes the release of growth hormone. Exercise causes the accumulation of ammonia in the blood, brain and muscle, which contributes to muscular fatigue. [2] Ornithine supplementation activates the urea cycle, promoting the excretion of ammonia and reducing fatigue during prolonged exercise. [3] Ornithine has been found to be synergistic with caffeine in improving mood and energy levels, when tested in office workers. [4]

Phosphatidylserine is a phospholipid that maintains human cell membranes, which is particularly important in the brain where it is vital for cognitive function. Research suggests that supplemental PS may improve both cognitive abilities (typically observed in the context of pre-existing impairments), and physical performance. Enhanced endurance, improved attention, better accuracy, and reduced stress have all been observed in those supplementing with PS.

One supplement that has been making headlines in the past year or so is phosphatidic acid (PA), after a study showed that it can increase lean body mass and muscular strength by activating the anabolic protein mTOR. Looking behind the headlines, the same study showed that phosphatidylserine (PS) has the same mTOR-activating effect. [5] In cell culture tests, phosphatidylserine elevated mTOR signaling 558%.

Whats the recommended dosage for PSyche?

As a dietary supplement, take 2-3 capsules in the morning and 1-2 capsules in the afternoon. For best results, take with food and/or with a caffeinated beverage. Consult with your healthcare professional before use.

Two capsules of this product contain about as much caffeine as half a cup of coffee. Please note that the use of this product alongside caffeine containing medications, foods, or beverages may cause effects including nervousness, instability and sleeplessness. 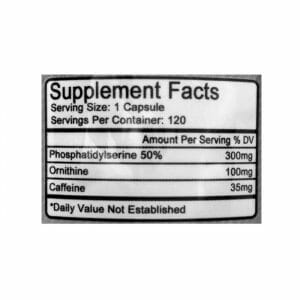 Use as directed. Do not exceed recommended daily intake. Keep out of reach of children!

Be the first to review “PSyche”