LipoMorph is the first fat burner supplement to specifically target all known modifiable mechanisms of white fat browning, and both brown and beige fat activation.

LipoMorph by Antaeus Labs is an Advanced Thermogenesis Activation Complex!

Antaeus Labs is proud to present LipoMorph, a weight-management supplement at the cutting edge of scientific understanding of human physiology. LipoMorph is the first “fat burner” supplement to specifically target all known modifiable mechanisms of white fat browning, and both brown and beige fat activation.

Ordinary white fat stores energy in the form of fat droplets, one droplet per adipocyte, which can be broken down by lipolysis into free fatty acids which are circulated into the blood stream and transported to the fuel-requiring tissue where they undergo beta-oxidation to acetyl-CoA which can be used to generate energy through the Krebs cycle. The energy stored in white fat, when liberated, is primarily burned to produce ATP to power cells.

Unfortunately, modern Western diet and lifestyle habits (consisting of excessive caloric intake typically coupled with insufficient physical activity) can cause an excessive accumulation of both subcutaneous and visceral white adipose tissue (WAT) that can have numerous adverse effects on health and health markers.

Brown fat is a thermogenic tissue that turns energy (stored as triglycerides) into heat. It’s found in abundance in hibernating mammals. When the temperature drops, animals like bears “go to sleep for the winter”. They’re able to survive by burning reserves of energy which have been stored as white and brown fat. The heat produced by the brown fat, which is activated by the cold, maintains the essential core body temperature of the animal through the winter months.

It’s also found in high quantities in babies, but is present in much smaller amounts in adult humans. Unlike adults, babies are unable to regulate their own temperature by, say, putting on a coat or moving to a warmer room, so their ability to regulate their own temperature is more vital to their survival. Accordingly, they have greater amounts of brown fat which is widely distributed viscerally and subcutaneously, decreasing as age increases until as adults brown fat is largely limited to small deposits in the lower neck and supraclavicular region. These deposits are suspected to be useful in cold weather for warming blood as it flows to the brain. Brown fat appears brown in color because of the high density of mitochondria and excellent blood supply. Certain natural conditions, like endurance exercise and cold temperatures, can encourage the human body to produce and/or activate brown fat.

Thermogenesis in brown fat is mediated by thermogenin, also known as uncoupling protein 1 (UCP1). UCP1 is specific to the mitochondria of brown fat, and functions as a proton transporter, uncoupling oxidative phosphorylation from ATP synthesis and allowing the resulting energy to dissipate in the form of heat. The thermogenic effect of UCP1 is known as “non-shivering thermogenesis”.

In addition to classical brown fat, which originates from the same progenitor cells as muscle tissue, brown-like fat expressing the same thermogenic genes as brown fat can be made from regular mature white fat cells and their precursors. This brown-from-white fat is variously termed “brite” or “beige” fat, and the process of its creation known as “browning” of white fat. Whereas excessive white adipose tissue (WAT) impairs health, the recruitment and activation of brown and beige adipose tissue is currently being investigated as being potentially beneficial in the fight against obesity and metabolic disorders.

Natural regulators of brown and beige fat include external conditions like cold temperatures, and exercise, as well as internal mechanisms like thyroid hormones, beta-adrenergic hormones, retinoids, PPARγ and PPARα agonists, and the liver X receptor.

Exercise has a number of positive health benefits, particularly regular, sustained aerobic exercise. One of the mediators of the positive metabolic effects of endurance exercise is peroxisome proliferator-activated receptor gamma coactivator 1-alpha (PGC-1α). PGC-1α is a transcriptional coactivator that binds to and activates transcription factors that regulate the genes involved in energy metabolism. It has a number of functions in the body, including influencing muscle fiber type determination, controlling lactate metabolism, and increasing amino acid breakdown in response to exercise stimulus.

One of the products of amino acid breakdown in muscle tissue is β-aminoisobutyric acid (BAIBA), arising from the degradation of thymine and valine. BAIBA is believed to act as a messenger signalling molecule, released into the blood stream by exercise, that helps the body respond to demands for more energy by increasing β-oxidation of fatty acids. It’s also recently been discovered that BAIBA can induce white adipose tissue (WAT) to express brown fat-specific genes – including the all-important thermogenic UCP1.

The thermogenic effects of brown fat can be activated in several ways; in hibernating animals and babies the trigger is cold temperatures. Cold temperatures trigger a release of norepinephrine into the blood stream, an adrenergic hormone which has several important roles, one of which is to activate brown fat via the beta-3 adrenergic receptor (β3 adrenoreceptor).

Unlike other beta adrenergic receptors, which are widely distributed about the body, being found in cardiac tissue, skeletal and smooth muscle, and adipose tissue, distribution of β3 receptors are restricted to a few tissues – including brown fat, where activation increases energy expenditure.

Brown fat also expresses heat-sensing receptors of its own. The receptor that detects cold temperatures is the cold and menthol receptor 1 (CMR1), more formally known as the transient receptor potential cation channel subfamily M member 8 (TRPM8).The transient receptor potential channels (TRPs) help the peripheral nervous system detect important variations in temperature; TRPV1 detects and regulates heat, but can also be activated by things like capsaicin (which is why chili peppers taste hot), and TRPM8 detects cold but can also be activated by compounds like menthol (which is why peppermint tastes cold).

BAIBA is a naturally occurring amino acid, a product of the metabolism of thymine and valine. [1][2]

Levels of BAIBA are increased significantly by endurance exercise, a result of PGC1α-mediated amino acid breakdown. [3]

2) PPARα regulates the use of fat as a source of energy. [5]

Activation of PPARα in the liver and adipose tissue promotes lipolysis and beta oxidation of fatty acids. [5]

PPARα agonism in the small intestine is thought to be involved in the regulation of satiety (lack of hunger). [7][8]

Coadministered PPARα and β3 adrenoceptor agonists may have a synergistic effect on the browning of white fat and UCP1-mediated thermogenesis. [9]

BAIBA induces human stem cells, under conditions that would normally result in white adipocyte differentiation, instead to express brown-fat specific genes like UCP-1. [4]

BAIBA induced increased expression of brown/beige fat-specific genes in an in vivo experiment on mice. [4]

BAIBA levels are increased after endurance exercise, and may be responsible for some of the metabolic benefits of exercise. [4]

Some of the fat-loss effects of thymine-based prescription drugs in humans may be due to an increase in utilization of free fatty acids resulting from the production of BAIBA as a metabolite. [10]

Octopamine is a naturally-occurring endogenous amine found in plants such as bitter orange as well as vertebrates and invertebrates. [12][13]

1) Octopamine is a selective agonist of the mammalian beta-3 adrenergic receptor (β3adrenoreceptor). [14][15]

2) Beta-3-adrenoceptor agonism is one of the primary regulators of brown fat activationand beige fat recruitment. [16]

Beta-3-adrenoceptor activation is believed to be required for the transdifferentiationof mature white fat cells into brite/beige adipocytes. [16]

Octopamine stimulates fatty acid oxidation in the liver, which may help prevent free fatty acids being reabsorbed into adipocytes. [17]

(−)-Menthol is a naturally-occurring compound found in wild mint and peppermint.

1) Menthol is an agonist of the TRPM8 receptor, also known as the cold and menthol receptor.

3) Menthol is also an agonist of transient receptor potential A1 (TRPA1) in humans, [19] another thermosensitive (cold-sensing) receptor that has been linked to brown fat activation in animal models. [20]

A human clinical trial is currently recruiting participants to determine the metabolic effects of menthol. [22]

Ilex Kudingcha (Ilex kaushue) is a species of the holly genus of plants. In China the leaves are dried and brewed into a tea called Kuding. The bitter-tasting Kuding tea has been used for millennia as a traditional chinese medicine (TCM) for a variety of ailments.

1) Kuding has the ability to suppress the activity of the Liver X Receptor beta (LXRβ) through antagonist activity. [23]

2) LXRβ antagonism results in decreased transcriptional activity of the enzyme sterol regulatory element-binding protein-1c (SREBP-1c), which is required for lipogenesis. [24]

LXRβ is believed to be a regulator (repressor) of UCP-1 activity. [25]

LXRβ antagonism may cause UCP1 transcription to be activated through an increase in PGC1α expression. [25]

Retinoic acid activates transcription of uncoupling protein-1 (UCP-1) both in vitro and in vivo. [26][27]

Retinoic acid is necessary for induction of human UCP1 by beta-adrenergic agonists. [28]

Fucoxanthin is a naturally-occurring xanthophyll found in brown algae and edible seaweed.

1) Some of fucoxanthin’s putative anti-obesity effects may be via downregulation of PPAR-γ.[30]

In in vitro experiments, fucoxanthin and its metabolites suppress adipogenesis via downregulation of PPAR-γ. [30]

A human study on obese non-diabetic women given a commercial product containing fucoxanthin and pomegranate seed oil found that it increase the resting energy expenditure of the participants and promoted weight loss. [34]

TRPV1 activation stimulates the release of catecholamines such as adrenaline and noradrenaline from the adrenal medulla. [35] Noradrenaline is a major regulator of brown fat activation, through β3 adrenoreceptor activation.

Nonpungent capsaicin analogs have been demonstrated to activate brown adipose tissue and increase energy expenditure in a human clinical trial. [36]

Chronic TRPV1 activation by dietary TRPV1 agonists can increase phosphorylated levels of protein kinase A (PKA) and endothelial NO synthase (eNOS), causing peripheral vasodilation and a decrease in blood pressure in hypertensive rats. [38]

The oral administration of TRPV1 agonists prevents adipogenesis and obesity in mice fed a high-fat diet. [39]

Some non-pungent capsinoids have also been found to activate TRPA1, another receptor that may be involved in cold detection. [41]

As a dietary supplement, take two capsules daily with food. We recommend taking one capsule with the first meal of the day and one capsule in the afternoon or evening with food. Users who weigh over 200 pounds may take three capsules per day if desired. Do not exceed four capsules in any 24 hour period. 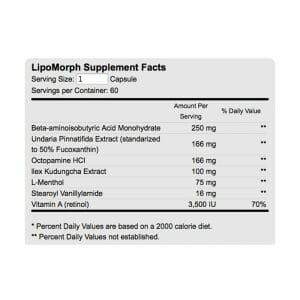 This product is intended to be consumed by healthy persons, who generally do not have health problems. Consult with a licensed physician before using this product, especially if you are taking any prescription, over the counter medication, dietary supplement product, or if you have any preexisting medical condition including but not limited to: high or low blood pressure, high or low cholesterol, cardiac arrhythmia, stroke, heart, liver, kidney or thyroid disease, seizure disorder, psychiatric disease, osteoporosis, diabetes, difficulty urinating due to prostate enlargement or if you are taking a MAO-B inhibitor or any other medication. Do not take this product if you have been diagnosed with prostate cancer, testicular cancer or breast cancer. Discontinue use 2 weeks prior to surgery. Discontinue use and immediately consult your heath care professional if you experience any adverse reaction to this product. Do not exceed recommended serving. Do not use if safety seal is broken or missing. KEEP OUT OF REACH OF CHILDREN.

These statements have not been evaluated by the Food and Drug Administration. This product is not intended to diagnose, treat, cure, or prevent any disease.

Be the first to review “Lipomorph” Cancel reply