Follidrone is the next generation of natural anabolic muscle building products.

Follidrone works great by itself or stacked with other Black Lion Research products.

Epicatechin is a fantastic natural muscle builder and endurance agent. Our 99% epicatechin is extracted from green tea and has a host of benefits for those looking to gain muscle, burn fat and improve performance.

This is one of the most well studied seaweeds on earth. Millions of dollars has been spent looking at this stuff for all kinds of purposes. Its exceptional with regards to health benefits and safety. Its also exceptional with regards to its benefits to us as muscle gain and fat loss enthusiasts. Like Epicatechin EC is a strong follistatin booster and as such myostatin inhibitor. In addition to its ability to reduce myostatin it is also a very solid ACE inhibitor. Ace inhibitors are interesting to say the very least. Ace inhibitors increase insulin sensitivity and glucose uptake into muscles. Lower ACE equates to lower overall bodyfat levels, increased fat metabolism in the liver and the ability to process sugars much faster. In addition increased cell surface GLUT4 increases nutrient shuttling into muscle tissue. It has been suggested that ACE inhibitor-induced positive effects may also be mediated by direct action on the skeletal muscle. In particular, two recently published observational studies documented that among hypertensive subjects free of CHF, treatment with ACE inhibitors was associated with better performance and muscular outcomes and genetic studies also support the hypothesis that the ACE system may be involved in physical performance and skeletal muscle function. Effects on the skeletal muscle are probably mediated by mechanical, metabolic, anti-inflammatory, nutritional, neurological and angiogenetic actions. Individuals with the II genotype of the ACE gene have greater endurance and greater skeletal muscle trainability in some studies. Hypertensive patients taking ACE inhibitors have greater cross-sectional muscle mass and a slower decline in walking speed than those taking other antihypertensives in epidemiological studies. ACE inhibitors are also known to improve endothelial function, muscle glucose uptake, increase potassium levels and modulate other hormonal systems including IGF-1, all of which could contribute to improved skeletal muscle function. Finally, ACE inhibitors could of course be mediating a direct effect on skeletal muscle structure and function; they are known to have trophic effects on myocardial tissue. Finally ACE inhibitors help us with fat loss independent of food intake. This appears to be due to a high energy expenditure related to increased metabolism of fatty acids in the liver, with the additional effect of increased glucose tolerance.

EC is a strong vasodilator and helps restore and increase endothelial function. EC can regenerate the vascular endothelium, the cells critical to the inner lining of the blood vessels. They generate the chemical nitric oxide (NO), which keeps the arterial walls relaxed and dilated. After a six-week study of EC, flow mediated dilation and NO mediated dilation increased by 60% and 50%. In another study, coronary artery disease patients were given EC for six weeks. Blood flow controlled by NO increased 50-60%. These results confirm that EC can rejuvenate damaged endothelial cells to produce NO. This effect was further confirmed in a study on erectile dysfunction (see below).

Scientists studied 31 men with erectile dysfunction (ED) for over six months. They compared eight weeks of EC use to Viagra. They looked at orgasmic function (OF), intercourse satisfaction (IS), overall satisfaction (OS), and erectile function (EF). Over those eight weeks, ECE scored 87%, 74%, 62%, and 66%. Viagra scored 27%, 44%, 39%, and 66%. No side effects were reported with EC.

Diacylglycerol acetyl transferase (DGAT) is the enzyme involved in the final step of triglyceride synthesis. Triglycerides are circulating fat bodies that ultimately wind up in the fat cells, and are almost always elevated in diabetes. They also have emerged as a major risk factor in vascular disease.

It was found that EC compounds inhibited DGAT more than 50%. In genetically caused obese laboratory rats, EC reduced body fat and increased physical activity. In another study, EC caused leanness and fat-resistance in animals given a high fat diet.

Frankly I dont know of too many things that have the potential of Ecklonia cava. Great for building muscle and losing fat, Vasodilation and a host of health benefits round this ingredient out and make it in my opinion the star of the show and I believe an even stronger ingredient than epicatechin.

Flos Carthami extract was initially a target for me because of its ability to increase Follistatin (see Fig 1.). Increased Follistatin, decreased Myostatin and activin A lead to increased muscle building potential. Flos Carthami has a strong antioxidant effect and is highly anti inflammatory. more than one tester mentioned a reduction in overall muscular pain perception acutely post training and during the DOMS stage of recovery. Several studies indicate that FC improves endothelial function and NO production similar to EC and (-)-E extract.

Quercetin niacin co_crystals are a whole new ingredient. Everyone knows about quercetin and niacin but quercetin has very poor oral bioavailability and niacin causes severe flushing at decent doses. Bonding the molecules together increases the absorption of Quercetin many times over and prevents the Niacin flush. Quercetin has been mentioned for everything from endurance and an increase in VO2 Max to fat loss to its strong antioxidant effect, however, for our purpose we added it specifically for its ability to increase the absorption of our other ingredients. Specifically, epicatechin. Its as just an added bonus we get all the benefits of both quercetin and niacin which includes vasodilation and improved cholesterol levels making this a star ingredient we plan on adding in high amounts in our coming PRE WORKOUT product

Both of these tested exceptionally well and have strong scientific evidence supporting their use to increase the absporption of epicatechin.

UPDATE- Naringenin is one of the major bioflavanoids in FD2; check out how it can benefit us for more than just absorption! http://www.ncbi.nlm.nih.gov/pubmed/20558145 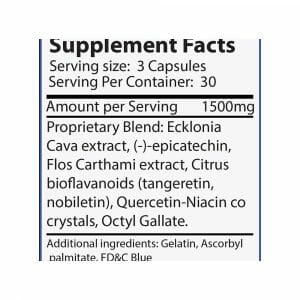 Keep out of reach of children. This product is only intended to be consumed by persons 18 years of age or older. Pregnant or nursing women should not use this product. Consult with your physician prior to use.

Be the first to review “FOLLIDRONE”