E-Control 2.0 is a potent aromatase inhibitor containing Androsta-3 5-diene-7 17-dione which helps with decreasing in circulating levels of estrogen in the body.

E-Control RX 2.0 will inhibit or reduce the amount of androgens in the body that can convert into estrogen. Androsta-3 5-diene-7 17-dione is a suicide aromatase inhibitor, meaning that it binds to the aromatase enzyme and can not be reversed.

Chlorophytum Borivilianum (extract) the roots are used traditionally in Indian subcontinent as aphrodisiac and sexual stimulant. Ethanolic extract of roots as well as sapogenins isolated from the roots were studied for effect on sexual behavior and spermatogenesis in albino rats. Administration of 100 mg/Kg and 200 mg/Kg b.w. of the sapogenin and ethanolic extract respectively had pronounced anabolic and spermatogenic effect in treated animals as evidenced by weight gains in the body and reproductive organs and histological studies. The treatment also markedly affected sexual behavior of animals as reflected in reduction of mount latency, ejaculation latency, post ejaculatory latency, intromission latency and an increase of mount frequency and attractability towards female.

N-Acetyl Cysteine (Nac) boosts male fertility by increasing your body’s production of glutathione. It is the building block for glutathione production. Glutathione is a potent antioxidant and your body’s most powerful detoxifier. Research shows NAC helps to improve male fertility by boosting sperm health. A recent study showed that daily supplementation with n-acetyl-cysteine for 3 months in men with abnormal sperm significantly improved sperm quality and reduced signs of oxidative stress. Oxidative stress harms sperm in a way that compromises fertility. The study was published in the journal Reproductive Biology and Endocrinology. Fifty men between the ages of 25 and 40 years were chosen. All of the men had asthenoteratozoospermia, which means the motility and morphology of the sperm are both abnormal. All of the men in the study had never had children and their female partners did not have any medical conditions that impair fertility.

As a dietary supplement, take one (1) capsule three (3) times daily in divided doses per day, with food. Use this product in cycles lasting no more than 8 weeks. 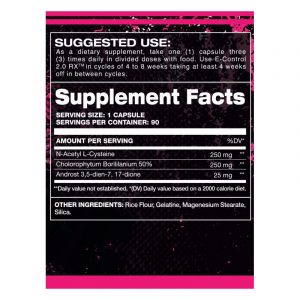 Be the first to review “E-Control Rx 2.0” Cancel reply