All Out Sweat Edition

All Out Sweat Edition is a 2 in 1 thermogenic pre workout that provides accelerated fat loss, endurance, energy and focus.

All Out Sweat Edition is exactly that, a sweat inducing assault on fat! This is a fully loaded pre workout with our intense fat melting Sweat Matrix. This 2 in 1 thermogenic fat burner is available in two great flavors.

β-aminoisobutyric acid (BAIBA) is an amino acid metabolite of L-valine and a myokine that plays a powerful role behind the benefits of regular exercise.

MitoBurn™ is the L-isomaer of BAIBA which is biologically active.

All Out Sweat contains the recommended dose of 500mg MitoBurn™ per serving.

The primary “feel good” compound in chocolate, theobromine is a cocoa extract that may provide cardiovascular and cognitive benefits through improved blood flow and antioxidant effects as well as energy production.

Theobromine is commonly dosed between 50-200mg prior to activity. All Out Sweat contains 200mg Theobromine per 1 scoop.

A beta-agonist similar to ephedrine, albeit less potent.Increases metabolic rate and fat-burning and shows synergism with caffeine.

Synephrine is not banned by WADA (World Anti-Doping Agency), has failed to cause false positive drug testing for amphetamines, and has been shown to be safe and free of most adverse side effects.

50mg synephrine when taken by healthy subjects at rest has been shown to increase caloric expenditure by 65kcal with no significant influence blood pressure or heart rate.

Synephrine is commonly dosed at 10-20mg 3 x day, or 50mg acutely. All Out Sweat contains 50mg synephrine HCL per 1 scoop.

Acetyl L-Carnitine is a carnitine molecule bound to an acetyl group that provides more neurological benefits compared to other versions of carnitine (such as L-carnitine) because it crosses the blood-brain barrier and increases the neurotransmitter acetylcholine in the brain.Reduces mental fatigue, protects the brain, and fights a decline in mitochondrial number and function, thereby increasing energy production.

Increases nitric oxide (NO) production leading to greater blood flow and “pump” during exercise as well as increased oxygenation of muscle tissue.

Sometimes called “Super Carnitine”, Gamma-Butyrobetaine Ethyl Ester HCl (GBB) is the molecule that your body converts into L-Carnitine when naturally producing its own carnitine.

All Out Sweat contains a research supported dose of 40mg GBB per serving.

CaloriBurn GP®, also known as Grains of Paradise, a spice related to ginger, contains 12.5% 6-Paradol, the active compound which can trigger thermogenesis and decrease body fat.Doesn’t cause nervous system desensitization or gastric distress as seen in similar compounds such as capsaicin (cayenne pepper). Also promotes digestive health, as well as possesses antioxidant and anti-tumor effects.

L-Citrulline is an amino acid that is more effective at increasing L-Arginine levels in the body than L-Arginine supplementation. Malate (or Malic Acid) is a Kreb’s cycle intermediate involved in energy metabolism. Typically they are combined in a 2:1 ratio as L-Citrulline DL-Malate.

Beta-alanine is a naturally occurring amino acid that supports the production of carnosine in the body. Carnosine delays muscle fatigue, while also delaying the onset of lactic acid. This means you can train harder and longer, while also reducing the lactic acid buildup that leads to slower recovery.

All Out Ultra Edition contains a full dose of 3,200mg Beta Alanine

Each full serving of All Out Ultra Edition contains 200mg L-Theanine.

Found in tea, theanine promotes relaxation without sedation; it helps you stay calm without making you tired or drowsy.

Theanine helps take off the ‘edge’ of many stimulants, and a synergistic effect is seen when coupled with caffeine in promoting cognition and attention.

Theanine is commonly dosed between 100-200mg prior to activity, or synergistically in combination with stimulants

PeakO2® is a trademarked blend of 6 adaptogenic mushrooms with clinical evidence for increasing power and endurance and attenuating physical and mental stress.

ElevATP® is a natural combination of ancient peat and apple polyphenols clinically shown to increase levels of endogenous ATP and support improved strength, power, and performance in resistance-trained athletes.*

Research has indicated that oral supplementation with exogenous ATP is unreliable for increasing ATP levels since it breaks down in the gut. ElevATP® is unique in that it naturally helps ourselves produce our own ATP the way nature intended.

Methylliberine (as Dynamine™) is an alkaloid structurally similar to caffeine and activates similar signaling pathways.

Boosts mental and physical energy without jitters or irritability. 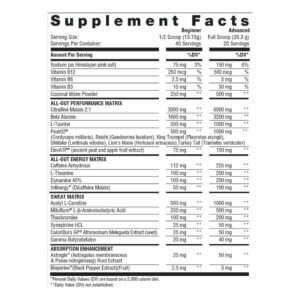 Be the first to review “All Out Sweat Edition”